Dental amalgam is the greatest source of mercury vapour (WHO 1991) and according to Health Canada (1996) 4 average sized fillings (8 surfaces) would create the maximum “tolerable daily intake” (TDI) for a 70kg adult with the TDI being reached with only one filling for a small child. Notably, many women weigh less than 70kg and according to mine and others’ research findings, many middle-aged women have far more than 4 and frequently more than 10 amalgam fillings. Notably, according to the published NZ Health Dept. figures in 1968, those aged 21 years at that time had an average of 16 fillings and 15 year old ‘teenagers already had 13. The majority of those fillings have been replaced by fresh amalgam over the years with an average of 10 fillings still frequently being retained into middle-age.

Why is mercury a health hazard for cancer?

Research based at the University of Colorado 25 years ago investigated blood taken from patients diagnosed as having adverse health effects from amalgam. The blood was immediately centrifuged and the lymphocytes were extracted and stained for viability. A significant proportion was found to be non-viable or effectively dead. They were therefore inactive in vivo. Eventually, this research culminated with lymphocytes being cultured and one batch being exposed to mercury at the so-called safe levels found in the blood of patients with a few amalgam fillings. By the 4th day, 80% of those lymphocytes were dead compared to only 3% in the control culture with no mercury (fig 1).

The role of the Natural Killer (NK) cell, a lymphocyte sub-set, includes identifying and destroying abnormal or malignant cells. Notably, several papers have been published describing how patients with “un-reactive” NK cells have either a higher incidence of secondary spread or a higher death rate. These include:

However, if one was to replace the word reactive with alive and non-reactive with dead, it would seem as if there could be a hitherto unrecognised covert cause for NK cell inactivity that warrants consideration and certainly further investigation. Huggins’ findings need independent replication with NK cells and I doubt that this would be very onerous, time consuming or expensive given modern laboratory technology.

Many German oncologists follow the teachings of the late Dr. Josef Issels regarded by many as the leading oncologist of the 20th century who treated over 8000 patients in his long career with reportedly the highest success rate. Notably, Issels stated that over 95% of these patients had significant causal factors in their teeth, jaws and tonsils and all patients would be referred to the dental department as a priority where all amalgam fillings were replaced and all devitalised (root-filled) teeth were extracted. Notably, both the Austrian and German Societies of Oncology advise replacement of amalgam with non-toxic materials. The covert effect of mercury on lymphocytes now appears to validate why Dr. Issels and his colleagues included dental revision in their patient management. 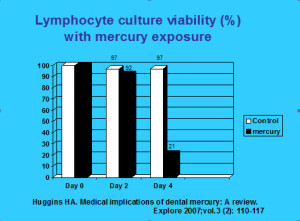 As far as dentistry and breast cancer is concerned there is yet another cause for concern. Statistically highly significant elevated levels of iron, nickel, chromium and mercury have been found in breast cancers compared to those in benign breast tumours (Ionescu JG et al. Neuroendocrin Lett. (2006)27;Suppl.1:36-9). Notably, all of these metals are in some ways carcinogenic and all are regularly used in dentistry (iron, nickel and chromium in non-precious bases for porcelain crowns and in bridgework and partials). In my albeit somewhat limited clinical experience with patients suffering from cancer I have found over the past 25 years (since being informed about mercury in amalgam) that the expected outcome can be materially changed when this toxic environmental factor is included in their management. Whilst it may take some time yet for this research to be adequately replicated and published, I consider that those with cancer as well as those who wish to reduce their risks, deserve to be properly informed.