As a physician and a woman with fibrocystic breast disease, it really bothers me when I hear X-Ray Mammography misrepresented as preventive medicine. X-Rays are not in any way, shape or form prevention. X-Ray Mammography is at best a form of early detection of breast cancer, but it can only find a tumor after it has grown to a significant size. Even then, X-Ray Mammography misses 50 percent of the tumors in women, who have dense breasts. Since over 50% of premenopausal women and 25 percent of postmenopausal women have dense breasts, a huge number of women are at risk of misdiagnosis by relying solely on X-Ray Mammography. This is especially true for women with fibrocystic breast disease – or for women with scar tissue in their breasts.

I am personally very concerned about detecting breast disease because of my family history – my sister died of breast cancer when she was 41. That’s why I began getting Infrared Mammograms many years ago. Unlike X-Rays, Infrared Mammography does not require contact with your breasts or exposure to harmful radiation. While X-Ray Mammograms are pictures of the breast anatomy, Infrared Mammograms are pictures of your breast metabolism, so that even pre-cancerous inflammation or microscopic tumors can be detected, because they generate extra heat due to increased blood flow. 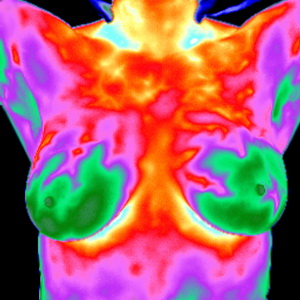 Nearly two years ago I decided to offer Infrared Mammography screening for Breast Disease at my clinic, where I specialize in integrative medicine. There is no question in my mind that this technology saves lives. far, Infrared Mammograms have detected early cancer in three of my patients whose X-Ray Mammograms had negative results.

One of them was my staff member. She has fibrocystic breast disease and some scar tissue from the removal of a cyst. She recently noticed another cyst, but when she took an Infrared Mammogram, it was the scar tissue that lit up. We sent her for an X-Ray Mammogram, which came out negative. Ultrasound showed some suspicious irregularities around the scar tissue, but it wasn’t definitive. They decided to do a biopsy and that came back abnormal.

It did show up on an MRI, but MRIs are not approved as screening tests. Insurance companies only approve MRIs after you have a biopsy. It’s sort of like locking the barn door after the horses have been stolen. It was amazing to me that it was borderline suspicious on ultrasound and negative on X-Ray Mammography, but she actually had a very significant tumor that was spreading. It would probably not have been picked up any other way

In another case a woman was very concerned even though her X-Ray Mammogram and ultrasound came out negative. So she came in for an Infrared Mammogram, and it showed a hot spot. She took those results back to the radiologist, who took another look at the X-Ray. Then they noticed this spot that they hadn’t even looked at before. The biopsy confirmed a cancerous tumor in Stage One, which is early enough to be cured by surgery. In the third case, we also caught the cancer at Stage One, thanks to Infrared Mammorgraphy that had revealed an area of concern, when the patient insisted the radiologist read the X-Ray in light of the Infrared images.

And conversely, we had a case where a woman’s X-Ray Mammogram and ultrasound indicated a problem close to the nipple. She had very small breasts, which makes it really hard to get a good exam, so they wanted to do a biopsy. Then her Infrared Mammogram came back completely normal, so I told her she didn’t need to do the biopsy. But she was really frightened, so she got a biopsy anyway — and it was negative

What I really love is when Infrared finds areas that are somewhat suspicious, so we make some lifestyle changes and recommend nutritional protocols, and three months or six months later we see those areas come back markedly more normal. Now that to me is true prevention. By the time you pick it up on X-Ray Mammograms, you have to do some sort of treatment such as surgery or radiation.

Traditionally, breast cancer was a disease of older women, but now we are seeing more and more cancer among younger women. Remember the recent case of the 10-year-old with breast cancer? It seems to be because of all the new risk factors such as artificial hormones from birth control pills, and exposure to all kinds of xenoestrogens – toxic environmental substances from plastics, pesticides and other chemicals that behave like estrogen, which are now being detected in the water supply of most major cities. But conventional medicine does not have an effective screening test for young women. If women start getting X-Ray Mammograms at age 20 or 30 instead of 40, imagine how much cumulative radiation they will be exposed to over a lifetime, enough to actually start causing cancer. I think Infrared Mammography is the solution to that. You can screen as many times as you want because there’s no harmful radiation.

I’m not saying we should do away with X-Ray Mammography. But I do think we could save more lives by accepting Infrared Mammography as an important screening technology for breast cancer prevention and early detection – especially for younger women and those with dense breasts.

The medical establishment put Infrared Mammography on the back burner about 30 years ago because of a flawed study, with many saying that more research needed to be done. But Infrared cameras and protocols have developed tremendously since then, so it is time for the health care professionals to take another look.

The current push for Infrared Mammography is coming from women who are searching for a way to spot breast cancer at the earliest possible stage, rather than waiting for a tumor to be big enough to be detected by an X-Ray. These are women who go on the Internet to do research for themselves.

I do have a word of caution for those women. Make sure the clinic you choose has the highest quality Infrared cameras and meets the industry standards for protocols. The first company I tried had cameras with lower resolution, inferior procedures and a slow turnaround time for interpreting the Mammograms. But then I switched to Infrared Medical Solutions, a company that meets my expectations in every category.

It is important for all women to know about Infrared Breast Mammography. It just might save your life.