As an integrative physician and as a woman with a strong family history of breast cancer, I am creating this website to educate women about how to protect their breast health as well as alternative options for breast screening, prevention, and treatment.

This website is dedicated to my sister, Virginia Weithman, who was taken from us way too young by breast cancer, due to lack of healthy options.

To your health and wellness!   -Robban Sica, MD

We’ve all been taught that mammograms are the “gold-standard” in breast cancer screening. However, this myth has been debunked in several studies.  Mammograms expose the body to harmful radiation, while infrared imaging (thermography) and ultrasound do not.  Even MRI is safer as it does not utilized radiation.

A number of years ago, research proved that mammograms were ineffective in identifying breast cancer in women with dense breasts and missed diagnosing cancer 50% of the time. Since 75 % of premenopausal women and 25 % of women post-menopause have dense breasts, this constitutes a large percentage of the female population!  Yet radiologists have still not widely adopted and have even resisted educating women about their breast density status! Conventional rebuttals claim that mammograms only miss 12.5% of cancers, a number arrived at by twisting statistics: Half of the 25% postmenopausal women with dense breasts = 12.5%. Your breast density status should be clearly identified on your mammography report. If you have dense breasts, you need to have an additional imaging study even on a routine basis. While most doctors advocate an ultrasound (which is a fairly safe test) but Infrared Imaging (thermography) is also an option.

For more information about dense breasts, see http://areyoudense.org/ and be sure to read the organization’s founder, Dr. Nancy Cappello’s moving story about her own missed diagnosis and fight to insure that other women don’t suffer the same fate. 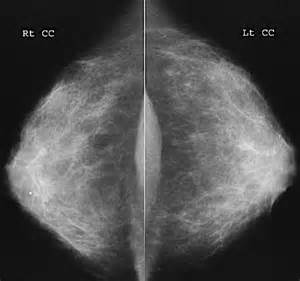 The prestigious British Medical Journal published the following study on  February 11, 2014. While this study has been widely criticized by conventional radiologists and breast surgeons (of course), in my opinion, what is the point of exposing women to radiation as a routine screening test when it does not save lives!

In my opinion, any test that is used annually to screen large numbers of women should not be invasive or create any additional risk. Unfortunately, ionizing radiation penetrates and invades the body, increasing cancer risk. Often, in women with dense breasts, more radiation and additional images are used to increase sensitivity of the test, thereby increasing radiation exposure for the very women who are most likely to be missed.  The fastest growing group of new breast cancers diagnosed are in younger women. Since such a large percentage of pre-menonpausal population have increased breast density, mammograms should not be the first choice for screening these women. In addition, mammograms compress the breast and, besides being painful, have potential to rupture and spread cancer.  While this remains controversial (of course), it is another concern about mammography when better options are available. Mammograms also have decreased sensitivity in women with breast augmentation, previous biopsies, or surgeries.

Diagnostic Exams: If a suspicious area is found on a less invasive screening exam, the radiation risk of a diagnostic mammogram may be justified. However, since MRI is far more accurate, that may be a more ideal diagnostic test. MRI is not practical for a screening test, due to the cost. 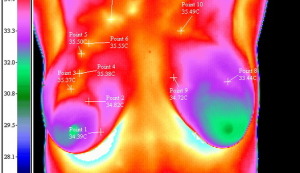 There are a number of advantages of thermography for routine screening. The technique utilizes a temperature picture which identifies areas of increase heat & blood flow, suspicious for cancer. It is non-invasive; it is as harmless as having your picture taken. It is not painful as no compression (or any touch) is required. There is no cumulative radiation exposure so an unlimited number of Images can be taken. It can accommodate for previous surgeries or augmentation. Best of all, it can be used in younger women with no risk.

Since Thermography can identify suspicious changes 5-7 years earlier that other imaging methods, preventive strategies can be implemented that can slow or even reverse the area of concern. (see Breast Cancer Prevention).

Understanding the Controversy over Breast Thermography:

Controversy does exist over thermography, however, most of the critics are quoting a 30 year old study that was seriously flawed. This study compared Infrared with X-Ray mammography and concluded that Infrared breast imaging showed too many false positives (picking up cancer when there was none). However, when those women were followed over several more years, a high percentage of those who were positive by Infrared scan went on to be diagnosed with breast cancer by X ray. Revised conclusions were published at that time but many still refer to the older study, without being aware that the study actually showed how much earlier pathologic changes in the breast can be identified by thermography.

Another issue that has deterred the widespread acceptance of thermography is the variance among techniques and interpretation. Older methods are less accurate that the newer the Marseille System (developed and studied by the Pasteur Institute in France) that provides results of breast thermology on the standardized ‘TH’ scale (see article). This method has been shown to have greater than 90% sensitivity and specificity. Older infrared cameras can also decrease sensitivity. Thermascan partner practitioners who utilize only the finest medical-grade cameras manufactured by the most respected company in the industry as well as the most experienced interpreters.

Dr. Sica researched the available systems and companies offering thermography products and services, before deciding to affiliate with Thermascan and their experienced team, to offer this state of the art testing and system at the Center for the Healing Arts.  www.centerhealingarts.com

Know your Risk
Brevagen is a test that Robban A. Sica, MD recommends at the Center for the Healing Arts. PC because it can give you valuable additional information about your risk, so you can take preventative action sooner:
More than 80% of women who develop breast cancer have little to no family history of the disease. BREVAGen is a simple swab-based test that can help determine your risk of developing breast cancer. BREVAGen is a scientifically validated risk test for sporadic breast cancer that can ultimately help you and your doctor detect the disease as early as possible. Using BREVAGen, your doctor firstly determines your individual breast cancer risk profile. This information is then used to create a personalized Breast Health Plan that outlines the most effective means and timing for monitoring your ongoing breast health.